The Story of the Cheese

The Story of the Cheese 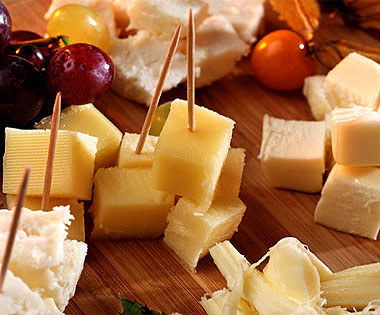 Cheese is a generic term for a diverse group of milk-based food products. Cheese is produced in wide-ranging flavors, textures, and forms.

The word cheese comes from Latin caseus,[3] from which the modern word casein is closely derived. The earliest source is from the proto-Indo-European root *kwat-, which means "to ferment, become sour". More recently, cheese comes from chese (in Middle English) and cīese or cēse (in Old English). Similar words are shared by other West Germanic languages — West Frisian tsiis, Dutch kaas, German Käse, Old High German chāsi — all from the reconstructed West-Germanic form *kasjus, which in turn is an early borrowing from Latin. When the Romans began to make hard cheeses for their legionaries' supplies, a new word started to be used: formaticum, from caseus formatus, or "molded cheese" (as in "formed", not "moldy"). It is from this word that the French fromage, Italian formaggio, Catalan formatge, Breton fourmaj, and Provençal furmo are derived. The word Cheese itself is occasionally employed in a sense that means "molded" or "formed". Head cheese uses the word in this sense.

Cheese is an ancient food whose origins predate recorded history. There is no conclusive evidence indicating where cheesemaking originated, either in Europe, Central Asia or the Middle East, but the practice had spread within Europe prior to Roman times and, according to Pliny the Elder, had become a sophisticated enterprise by the time the Roman Empire came into being. The earliest evidence of cheese-making in the archaeological record dates back to 5,500 BC, in what is now Kujawy, Poland, where strainers with milk fats molecules have been found. Earliest proposed dates for the origin of cheesemaking range from around 8000 BCE, when sheep were first domesticated. Since animal skins and inflated internal organs have, since ancient times, provided storage vessels for a range of foodstuffs, it is probable that the process of cheese making was discovered accidentally by storing milk in a container made from the stomach of an animal, resulting in the milk being turned to curd and whey by the rennet from the stomach. There is a legend - with variations - about the discovery of cheese by an Arab trader who used this method of storing milk. Cheesemaking may have begun independently of this by the pressing and salting of curdled milk to preserve it. Observation that the effect of making milk in an animal stomach gave more solid and better-textured curds may have led to the deliberate addition of rennet. Early archeological evidence of cheesemaking has been found in Egyptian tomb murals, dating to about 2000 BCE. The earliest cheeses were likely to have been quite sour and salty, similar in texture to rustic cottage cheese or feta, a crumbly, flavorful Greek cheese. Cheese produced in Europe, where climates are cooler than the Middle East, required less salt for preservation. With less salt and acidity, the cheese became a suitable environment for useful microbes and molds, giving aged cheeses their respective flavors. 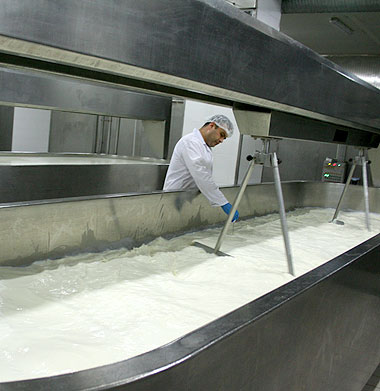 At refrigerator temperatures, the fat in a piece of cheese is as hard as unsoftened butter, and its protein structure is stiff as well. Flavor and odor compounds are less easily liberated when cold. For improvements in flavor and texture, it is widely advised that cheeses be allowed to warm up to room temperature before eating. If the cheese is further warmed, to 26–32 °C (79–90 °F), the fats will begin to "sweat out" as they go beyond soft to fully liquid. Above room temperatures, most hard cheeses melt. Rennet-curdled cheeses have a gel-like protein matrix that is broken down by heat. When enough protein bonds are broken, the cheese itself turns from a solid to a viscous liquid. Soft, high-moisture cheeses will melt at around 55 °C (131 °F), while hard, low-moisture cheeses such as Parmesan remain solid until they reach about 82 °C (180 °F). Acid-set cheeses, including halloumi, paneer, some whey cheeses and many varieties of fresh goat cheese, have a protein structure that remains intact at high temperatures. When cooked, these cheeses just get firmer as water evaporates. Some cheeses, like raclette, melt smoothly; many tend to become stringy or suffer from a separation of their fats. Many of these can be coaxed into melting smoothly in the presence of acids or starch. Fondue, with wine providing the acidity, is a good example of a smoothly melted cheese dish. Elastic stringiness is a quality that is sometimes enjoyed, in dishes including pizza and Welsh rarebit. Even a melted cheese eventually turns solid again, after enough moisture is cooked off. The saying "you can't melt cheese twice" (meaning "some things can only be done once") refers to the fact that oils leach out during the first melting and are gone, leaving the non-meltable solids behind. As its temperature continues to rise, cheese will brown and eventually burn. Browned, partially burned cheese has a particular distinct flavor of its own and is frequently used in cooking (e.g., sprinkling atop items before baking them).